Pick Your Thing. Then Never Shut Up.

Way back in the day I had what my team affectionately called my "Branch Manager Suit". It was a beautiful dark blue pantsuit I probably bought somewhere like Charlotte Russe or maybe Marshall's (what, it was the 90s and I was poor). All I know is when I wore this suit I turned heads, got complimented, and was treated like a dang professional!! Dress for the job you want, or something. I desperately wanted to be a Branch Manager for my staffing agency, and though it took some convincing, I GOT IT.

Fast forward a little bit - I wanted a bigger challenge, so volunteered to move to California to run a BIGGER office. I was leading two tiny branches out of Seattle and Portland, and was ready for the big time! Oh if I'd only known... I was about to be thrown to the wolves disguised as the Good Old Boys Club. I spent my last year at said agency being shushed, having my ass grabbed, and generally patted on the head and/or ignored. (being ignored was usually better)

Fast forward to present time - I've spent the last 20ish years in staffing/recruiting of some sort, and have seen some pretty great and pretty awful things in that time. Especially around giving women a voice. In an industry that is female dominated (how many female recruiters do you know vs male?) there sure are a lot of men in charge. In fact, even in cases where my direct boss was a woman, the leaders above her have been predominately male.  (I've had some AMAZING male bosses - present leaders especially. Don't miss the point.)

Recently, a question was posed in a Facebook discussion asking if women recruiters struggled with being heard. It referenced a tweet where a woman expressed gratitude for the men on her team who made sure to include her / give her room to speak up and a manager who values feedback and diversity. Which is great, right? Allies are allies. BUT - a lot of the comments in this discussion were from women who've never had a problem being heard, or learned to speak up for themselves and don't tolerate such foolishness.

Good for you, but that's not been my reality.

See, all the way back to my Branch Manager Suit and my Boys Club Staffing Agency days, I was silenced. Silenced by my own fears and insecurities. Silenced by the very real possibility that I'd get "in trouble". Silenced by the knowledge that someone who had more clout/street cred/confidence/lack of self-awareness would push back, laugh at me, or worse. 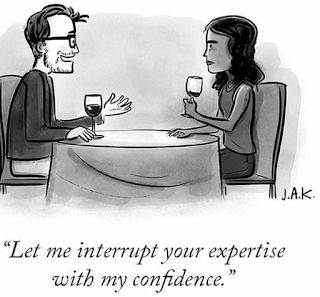 No ma'am - I had to find my voice. Now don't get me wrong, I was getting a bit louder, a bit tougher, with every professional success. At any rate, I started writing. All the way back in maybe 2011ish? I started blogging and people started listening. A few people liked what I had to say. Some didn't, and I had my share of keyboard warriors coming at me. Every time I took a stand and STAYED STANDING, I got a little stronger. A little bolder. A little less likely to back down.

These days I'm a big champion of recruiting in yoga pants (surely you saw that coming ;) ). I still get into heated debates over it, which if you think about it - borders on ridiculous. Does it really even matter in most cases, especially for tech recruiters? But I digress. The point is, I found my voice. I found that thing that I'm willing to take a stand on, push back on, and defend. It's a silly little thing, really. But over the years I've been hollering about this, I've developed a (even thicker) thick skin. I don't care so much if someone doesn't like me. It's just freaking yoga pants. And if I can take a stand over yoga pants, dammit I can take a stand on shit that matters too.

For the first time probably ever, I commented on a friend's Facebook page about something political. I don't do politics on Facebook, just a personal choice I made. Stand by it, but this particular situation had me so worked up I had to share my thoughts. It wasn't well received by everyone (no opinion ever will be, trust me on this) but it felt good to speak my mind. It felt good to be HEARD.  I didn't die. Didn't lose my job, wasn't shunned by society, no animals were harmed in the making of my commentary. Just little old me, small town girl from Kansas, having a voice. And using it.

I realize a lot of people will read this, maybe scratch their heads or even laugh at it. All good, my friends. I hope somewhere some young woman who's tired of being spoken over finds a thing. Maybe it's yoga pants. Maybe it's being vegan. Maybe it's smashing the f*cking patriarchy. Find your thing. I'll be here to listen.

There's a sucker born every minute. Some go into recruiting.